EE faculty and students reach out to the community

The School at Columbia University welcomed young science explorers and their families to its Imagine the Future 2016 Science and Engineering Expo on February 6th 2016— and Electrical Engineering faculty and graduate students were there to take part in the event.

Seven EE faculty members took their cutting edge research out of the laboratory, off the campus, and directly into the lives of the K-8 students right around the corner. They made the world of science and engineering come alive with hands-on fun, offering the young students a unique opportunity to learn not only about some exciting scientific facts and developments, but also about Electrical Engineering and Columbia University.

EE faculty participation in the Expo reflects their commitment to be positive and inspiring members of the larger New York City educational community. They understand how powerful it can be for young students and their families to meet “real” scientists and learn about the fascinating things they do. And they understand that bringing their work, and their graduate student researchers, into the local schools is a way to ignite an interest and excitement for science and engineering that may be life-changing for the young students and their families.

Here are some highlights of the five Expo exhibits presented by EE faculty and graduate students:

The young students who interacted with Professors Keren Bergman, Michal Lipson, and Gil Zussman at their “Lights, Lasers, and Your Smartphone” exhibit got to walk through a student-constructed Laser Maze, discover some interesting things about how light acts like a wave, and learn how lightwaves and lasers enable mobile networking. Students from Professor Bergman's group who participated in the event were Christine Chen, Wiem Samoud, Ke Wen, and Yishen Huang; Varun Gupta and Timothy Goodwin, Alex Loh from Professor Zussman’s group; and Romy Fain, Gaurang Bhatt, and postdoctoral researcher Felippe Barbosa from Professor Lipson’s group. 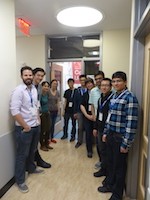 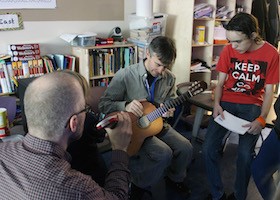 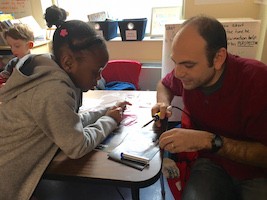 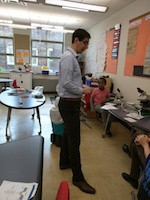 In his exhibit “Colored LEDs and Microcontrollers,” Professor John Kymissis showed students how to program a small computer that could make all the colors in the rainbow by mixing red, blue, and yellow LED lights.

Professor Jamie Teherani’s exhibit “How to Make Computer Chips” had students look at computer silicon wafers and human hair under a microscope to see how much smaller the wafers are. Students also tried on a cleanroom “bunny suit” worn by researchers to make sure that hair and dust do not contaminate electronic devices during fabrication.

In his exhibit "Seeing Sounds", Professor Dan Ellis made sound waves visible by feeding them into a Kunst tube, a six-foot perspex tube filled with polystyrene balls that bounce around where the sound is strongest.  "It's really exciting to see kids make the connection between what they hear, and the tiny motions that we don't usually see, but which can lead to beautiful patterns," he said.

How can a person communicate if she is not able to speak? In “Type COOL Without Using Your Hands,” Professor Nima Mesgarani showed students his non-invasive electroencephalography technique for measuring brain signals and explained how these signals can spell out a person’s message -- without speaking. Graduate students participating from Professor Mesgarani’s group were Prachi Patel and Sarat Vysyaraju.

When describing the Expo experience, Professor Dan Ellis summed things up this way: " Our hope is that these exhibits will show the visitors the excitement and power of engineering and science, and will encourage them to pursue these areas.”

To see more pictures from this event visit the EE Flickr page.