Michal Lipson, Eugene Higgins Professor of Electrical Engineering and professor of applied physics, as well as a Columbia Nano Initiative Executive Committee member, has been awarded the Comstock Prize in Physics by the National Academy of Sciences (NAS) for her pioneering research in silicon photonics. The prize is awarded about every five years to a North American resident for a recent, innovative discovery in electricity, magnetism, or radiant energy, and will be presented to Lipson in a ceremony on April 28 in Washington, D.C.

Lipson’s pioneering research established the groundwork for silicon photonics, a growing field in which she remains a pioneer and leader. The technology, which uses optical rays to transfer data among computer chips, is now considered to be one of the most promising directions for solving major bottlenecks in microelectronics. 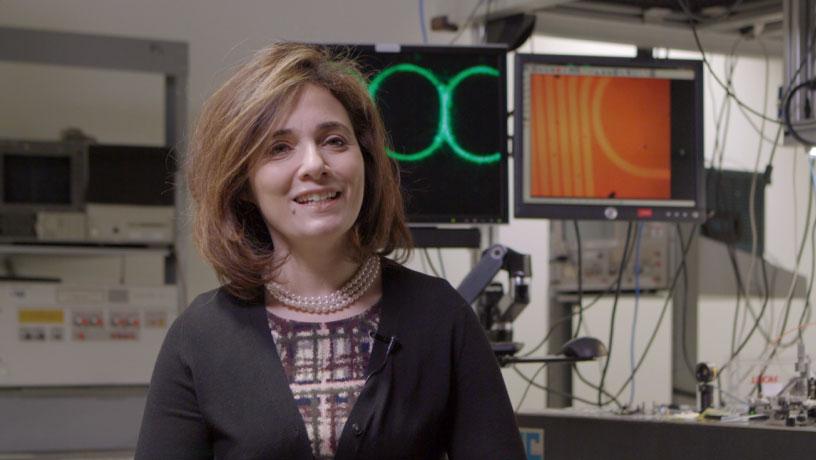 “I am deeply honored to receive this award and to be recognized by the NAS,” said Lipson.

Lipson investigates the physics and applications of nanoscale photonic structures and is particularly interested in light-confining structures that can slow down, trap, enhance, and manipulate light. Her innovations involved techniques to tailor the electro-optic properties of silicon that led to the first major advances in silicon photonics, including demonstrating the ability to confine light well beyond the traditional diffraction limit using what she termed “slot waveguides.” These waveguides are being applied for many applications, including telecommunications, bio-sensing, and on-chip transport of nano-particles.

Lipson’s work has played a major role in advancing the field of silicon photonics. Among her many discoveries, she has demonstrated the first silicon photonics GHz modulator for transmitting electronic signals over large distances with low power. Today silicon photonics is being commercialized extensively. It is one of the very few areas in applied physics ever to be adopted by industry fewer than 10 years after its conception. Her research interests are constantly evolving to keep up with important trends, and her Lipson Nanophotonics Group now includes expertise in areas ranging from imaging of the brain to energy recycling.

The co-author of more than 200 scientific publications, which have collectively been cited more than 35,000 times, Lipson is one of the most highly cited researchers in modern physics and holds more than 20 patents.

Lipson joined the Columbia Engineering faculty and the Columbia Nano Initiative in 2015.  She has received extensive honors, including the 2019 IEEE Photonics Award, the Optical Society’s (OSA) R. W. Wood award, MacArthur Fellowship, Blavatnik Award, IBM Faculty Award, and the NSF Early Career Award.  In December 2018, she was awarded an honorary doctorate degree by Trinity College at the University of Dublin.  Since 2014 she has been named every year by Thomson Reuters as a top 1 percent highly cited researcher in the field of physics. She has held several leadership positions in the scientific community, including serving on the boards of the IEEE Photonics Society and OSA.

Lipson joins two other former faculty members from Columbia University who received the Comstock Prize in Physics: Charles Townes, also an optical physicist, and C. S. Wu, a nuclear physicist, who were recognized, respectively, in 1958 and 1963.

Charles Townes, who was a professor at Columbia from 1950 to 1961, was one of nine recipients of the Comstock Prize to also receive a Nobel Prize; the others were Theodor Hansch, Raymond Davis Jr., Leon Neil Cooper, J. Robert Schrieffer, William Shockley, Percy W. Bridgman, Clinton J. Davisson, and Robert A. Millikan.

C.S. Wu was an experimental nuclear physicist who worked on the Manhattan Project. Her research into the beta decay process and properties of neutrons and other subatomic particles provided data that confirmed theories about what happens with energy and mass when atoms decompose.

The Comstock Prize in Physics, established through the Cyrus B. Comstock Fund, has been awarded since 1913.  Recipients receive a $50,000 prize and $50,000 to support their research.