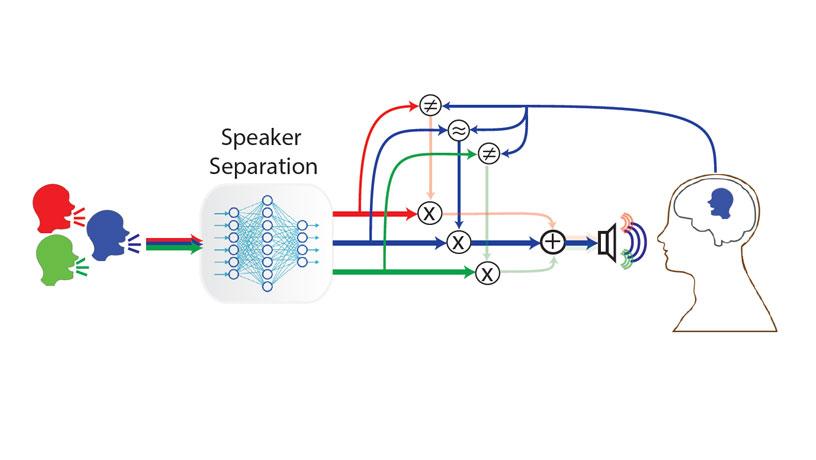 Nima Mesgarani's project aims to help people who are hearing impaired have an easier time following a conversation in a multi-speaker environment such as a noisy restaurant or a party.

Columbia Engineers garnered many of the awards, including the grand prize, at NYC Media Lab’s Annual Summit on September 20. More than 1,000 attendees, from entrepreneurs, engineers, creative technologists, product designers, data scientists, and makers to thought leaders and technologists from leading digital media, technology, and communications companies, attended the summit, held this year at The New School. The event showcased some 100 interactive demos of emerging media and technology from NYC Media Lab’s consortium of universities, including Columbia University, NYU, The New School, CUNY, Pratt, and Cornell Tech.

“This was a great opportunity for our students and faculty to showcase their innovative, cutting-edge work,” said Mary Boyce, Dean of Columbia Engineering. “We are proud of their extraordinary creativity and their ability to cut across disciplines to create an exciting and better world for all of us.”

Associate Professor of Electrical Engineering Nima Mesgarani and postdoctoral research scientist James O’Sullivan at the Mortimer B. Zuckerman Mind Brain Behavior Institute, won the grand prize of $10,000 for their project, “Towards a Mind Controlled Hearing Aid: Decoding Attention Without Access to Clean Sources.” The researchers are developing a system that will help people who are hearing impaired have an easier time following a conversation in a multi-speaker environment such as a noisy restaurant or a party. Their end-to-end system receives a single audio channel containing a mixture of speakers by a listener along with the listener’s neural signals, and automatically separates the individual speakers in the mix, determines which speaker is being listened to, and then amplifies the attended speaker’s voice to assist the listener.

Another Columbia Engineering win included, in the Engineering category, graduate students Rand Hidayah (PhD) and Siddharth Chamarthy (MS) for their project “C-Alex with Hololens for visual feedback.” They are working with Sunil Agrawal, professor of mechanical engineering and of rehabilitation and regenerative medicine, on C-ALEX, an exoskeleton that measures a person’s leg and provides visual feedback through the hololens and haptic feedback at the same time, to improve walking gaits.

In all, NYC Media Lab awarded $25,000 in prizes for emerging media technology research projects, prototypes, and startups. Learn more about all the winners, or browse the demo expo.