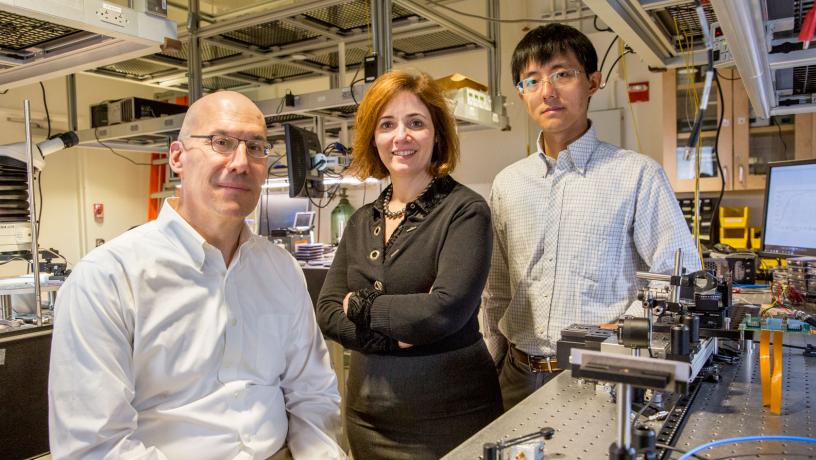 Columbia Engineering researchers, collaborating with colleagues at the University, have won two grants from the National Science Foundation (NSF) for research that has the potential to transform quantum research. The Columbia projects are among the first to be chosen for federal funding for quantum research since the announcement of the National Quantum Initiative Act, signed into law by President Trump last December. Out of 200 pre-proposals for this funding opportunity, only 19 grants were awarded by the NSF.

Co-PIs Alexander L. Gaeta and Michal Lipson (both Applied Physics and Applied Mathematics and Electrical Engineering), together with Ana Asenjo-Garcia (Physics), won a four-year, $1.44 million grant for their proposal, "All-Photonic Quantum Network.” Their proposal takes a new approach to attaining highly entangled photon states by using a photonic-chip platform based on silicon nitride.

Large-scale connections among many particles at the quantum level, known as qubit entanglement, are essential for the development of quantum computers and networks, and applications in quantum computing, communications, and sensing. Current, intensely studied approaches to generate qubit entanglement use neutral atoms, ions, or superconducting circuits, and rely on strong qubit-qubit interactions. But researchers have found that successfully entangling these matter-based qubits has been very challenging because the entire system is highly sensitive to any environmental perturbations or losses and thus must be completely isolated for a time long enough to process and perform measurements on the qubits. The proposed system is based on silicon nitride, for which Lipson’s group has demonstrated the lowest losses for any chip-based platform.

“If we are successful, the techniques and devices we develop will be revolutionary, as large multipartite-entangled, or cluster, states are a tremendous resource for universal, measurement-based quantum computers where computation occurs by simply making single-qubit measurements,” says Gaeta, David M. Rickey Professor of Applied Physics and of Materials Science and professor of electrical engineering.

The main bottleneck to realizing a one-way quantum computer has been the difficulty in generating these large cluster states and doing so with reasonable probability. To address these challenges, Columbia’s team brings world-class expertise in theoretical quantum optics (Asenjo-Garcia), experimental quantum and nonlinear photonics (Gaeta), and chip-based nanophotonics (Lipson). They plan to create an integrated photonics platform that can generate highly entangled states of light at higher rates and with higher fidelity that what has previously been demonstrated. These highly entangled states form scalable photonic building blocks for generating cluster states for quantum computers and quantum networks.

The silicon-nitride photonic platform has significant advantages over other materials such as silicon by offering record low losses. The rate of entangled photon generation will be dramatically increased by leveraging recent advances in massively parallel photonic on-chip devices that can generate and convert photons within a well-defined spectral grid with high efficiency, and can store light on-demand for timescales on the order of hundreds of nanoseconds with high efficiency, using massively parallel micron-size devices.

“Our project could open the door to the realization of all-photonic quantum networks and repeaters, thus connecting quantum devices, instruments, and machines, that are critical for enabling quantum information technology,” says Lipson, Eugene Higgins Professor of Electrical Engineering and professor of applied physics. “For example, such a scheme would enable measurement-based universal computation, where computation occurs by performing single-qubit measurements on a highly-entangled resource state.”

A second NSF grant was awarded to a proposal put forward by Principal Investigator Sebastian Will (Physics), and Co-PIs Asenjo-Garcia (Physics) and Nanfang Yu (Applied Physics and Applied Mathematics at the Engineering School). One of two that received a “high priority” ranking, the theoretical ideas behind the project—“Enhancing Quantum Coherence by Dissipation in Programmable Atomic Arrays”—constitute a paradigm shift in the fundamental understanding of light-matter interactions. The convergence between Will’s experimental expertise with ultracold atomic systems, Asenjo-Garcia’s novel theoretical ideas, and the groundbreaking hologram technology developed by Yu gives the team an edge in the race to transform light-matter interfaces. If the team can successfully achieve its goal, the result could redefine the limits of quantum applications and devices, including optical lattice clocks, quantum sensors, and quantum memories.

The National Quantum Initiative Act has created a multiagency federal program to accelerate quantum research and development for economic and national security. It allocates $1.2 billion in government funds to advance the application of quantum physics to real-world problems in the United States over the next five years.

“We’re excited to be at the forefront of this exciting initiative that will transform quantum science and technology,” Gaeta adds. “We hope our work will provide a path to solving computationally complex problems, providing communication security, and enhancing navigation, imaging, and other sensing technologies in ways that are impossible using current, conventional hardware.”