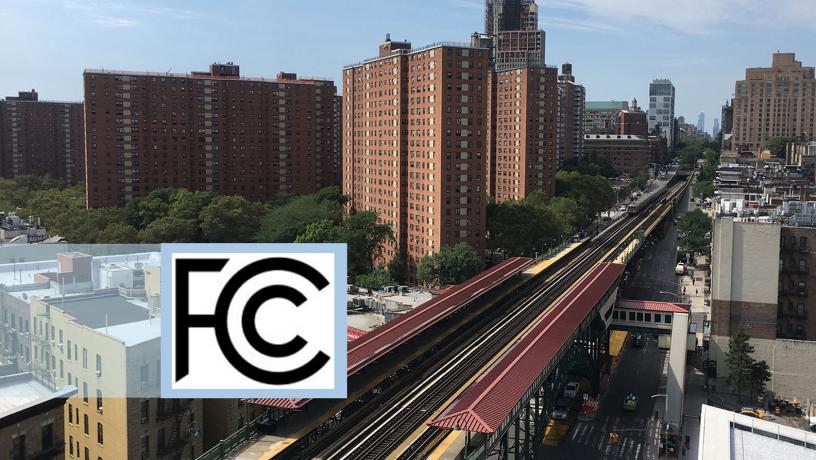 The Federal Communications Commission (FCC) has designated the West Harlem testbed COSMOS as one of the country’s first two Innovation Zones. The designation streamlines the usual FCC licensing process for COSMOS, a living lab for advanced wireless research now being built between Columbia’s Morningside and Manhattanville campuses, allowing researchers to conduct multiple experiments on the COSMOS testbed under one license. The Innovation Zone was designed to expedite development of wireless technologies that will push bandwidth capabilities and latency limits of 5G and beyond—precisely the goal of the COSMOS testbed.

“Few concepts are more central to America than innovation—it’s what we do best,” said FCC Chairman Ajit Pai. “So it’s inspiring to see our Innovation Zones program taking off. These projects will test new advanced technologies and prototype networks like those that can support 5G technologies.”

In 2018, COSMOS was funded under the National Science Foundation’s Platforms for Advanced Wireless Research (PAWR). Led by researchers at Rutgers, Columbia Engineering and NYU, and in partnership with New York City, Silicon Harlem, City College of New York, University of Arizona, and IBM, the COSMOS platform is emerging as a proving ground for next-gen wireless technologies and applications.

By 2020, the number of Internet-connected devices is expected to grow to 20 billion, creating an urgent need for U.S. wireless infrastructure that can rapidly process massive amounts of data. And to improve networking speeds, the COSMOS team is tapping unused radio spectrum bands and integrating optical fibers underground with radio antennas and other equipment on city rooftops and light poles. The high-bandwidth, low-latency network is expected to allow applications to transmit data faster than one gigabit per second and reduce response times to a few milliseconds, improving performance 10-fold over current wireless networks. To achieve these speeds, the data-processing will be handled by on-site “edge cloud” servers rather than in far-off data centers.

“The open-access, highly programmable COSMOS platform will allow researchers from anywhere in the country to log in and test ideas for improving network performance and create smart city applications, such as augmented-reality navigation for the visually impaired and smart traffic intersections,” said Electrical Engineering Professor and Data Science Institute (DSI) member Gil Zussman, who leads the Columbia team.

“In particular, the testbed’s programmability and flexibility, along with the designation of the testbed area as an Innovation Zone, will provide unique opportunities to run experiments in a densely populated real-world environment. This can take wireless networking and smart cities research to an entirely new level. We greatly appreciate the FCC’s support of this vision.”

The testbed’s programmability and flexibility, along with the designation of the testbed area as an Innovation Zone, will provide unique opportunities to run experiments in a densely populated real-world environment. This can take wireless networking and smart cities research to an entirely new level.
GIL ZUSSMAN
PROFESSOR OF ELECTRICAL ENGINEERING

In May 2019, the COSMOS team, led by Professor Dipankar Raychaudhuri and Ivan Sekar from Rutgers University, (along with Columbia electrical engineering professors and DSI members Zussman, Zoran Kostic, Harish Krishnaswamy, and computer science professor and DSI member Henning Schulzrinne), completed the project’s pilot phase, which included the development and deployment of a highly programmable base station and small cells on-site at Columbia Engineering as well as extensive fiber and edge-cloud infrastructure. IBM Research’s team  recently also delivered the initial version of mmWave radios. The team now begins Phase 1 of the project, which will focus on extending the testbed area north to City College at 135th Street. Phase 1 is expected to be completed by October 2020, when the testbed will open to researchers.

In addition, educational outreach forms a major component of the COSMOS project, particularly in regards to  local middle and high school students. And for the past two summers researchers, students, and outreach teams from NYU and Columbia Engineering, under the leadership of NYU Prof. Thanasis Korakis, have worked with 20 NYC teachers, teaching them advanced techniques in wireless technology. The teachers, who spent the summer on the campuses developing lab experiments for their students, will use the lab experiments in their classrooms, giving their students hands-on experience with the next wave of mobile technology.  This team’s work with teachers was recently recognized with an award from the Verizon 5G EdTech Challenge.

“This large-scale project has many facets involving development, deployment, outreach, and research that could not be achieved without the unique collaboration across the entire team and without the leadership of the Rutgers team,” said Zussman. “In addition to the engineers, students, and faculty on the project team, the initiative is supported by numerous stakeholders in the city, local community and within Columbia. We greatly appreciate NSF’s efforts to obtain the FCC designation. We view it as a recognition of the hard work by the many project participants and stakeholders. And we look forward to supporting experimentation on the testbed by a broad community of researchers.”